They say one must not judge a book by its cover, yet some of the more interesting books I’ve read in the last one year, were picked up primarily for their cover. Just like “The Dressmaker of Khair Khana” the cover of Provenance by Laney Salisbury and Aly Sujo, with it’s brilliant hues, made me pick it out of a pile of books at the bi-annual book sale by Strand Bookstore. 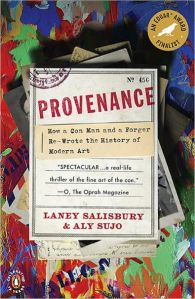 Based on the true story of “Professor” John Drewe who successfully conned not only the art dealers and investors, but also the most erudite of the art world, the book takes the reader on an amazing journey through the British art world.

Drewe’s first  “victim” was John Myatt, a single father struggling to provide for his two children and keep a roof over their heads, who eventually became his accomplice as the man who forged over 500 paintings in the name of famous artists such as Le Corbusier and Giacometti.  A pathological liar, Drewe took on various personas and adapted his stories depending on who was in front of him. Tapping  into the insecurities of men, who had lost everything and were struggling to break even, Drewe built an enviable team of dealers and runners who helped him sell the forged paintings. But what was really impressive was the way he hoodwinked the who’s who of the art world, successfully breaching the art archives of holy institutions like the Tate museum of art. The ease with which he was able to fool the erudite of the art world with a small donation of £20,000  or a meal at Claridge’s and gain access to the holiest of art archives, reveals how shallow they were.

A taut narrative, the novel fast drew me into the world of art and forgery. The way a painting is valued has always amazed me. What is it in one painting that makes it worth millions and not there in another which seems the same? This  paragraph that said it all for me :

“Yesterday, this picture was worth millions of guilders and experts and art lovers would come from all over the world and pay money to see it,” he wrote before serving a one-year sentence. “Today it is worth nothing and nobody would cross the street to see it for free. But the picture has not changed. What has?”

Perhaps it was my interest in art that increased the novel’s appeal, but I think that the story has been so well researched and brilliantly narrated that anybody who enjoys a thriller will enjoy it. The book has a certain who-dun-it feel to it, that kept me on my toes till then end, wondering if Drewe will get caught. Would I recommend it? Without a second thought – rarely does one find a book that’s exciting and educating at the same time!