The first film I saw during Desi Pardesi at the NGMA, Pollock was a film I wanted to see for several reasons. Till last year I knew nothing about Pollock, except that he featured on a tee-shirt I’d bought in France with the faces of the most famous artists through the ages. It was only when the curation team made a Themeefy Mag on him, that I discovered more about him. So I went for this film curious to see how he became the artist he was. An interesting film, with brilliant acting by Ed Harris and even better acting by Marcia Gay Harden as Lee Krasner, Pollock’s wife who inherited the Pollock property  after his death. The film made me wonder if he would have ever made it without his wife, for she not only played the role of his PR (and he sure needed one!) but also nursed him to health after his drinking binges and provided a stable environment for him to paint (right down to making him leave New York and its bars to a less alcohol friendly Long Island where he could find true inspiration).

I can’t pretend to understand Pollock’s art, though I did find his technique rather captivating. I found this composition particularly arresting because of the colours used.

Pollock led a depressing life, like so many artists, and the film left me feeling quite blue (especially for a Sunday morning) so I was rather glad to step out into the sun and soak in the sight of the foliage at NGMA before heading off to mull over the film, Pollock’s life and his oeuvre, while waiting for the next film the following Sunday…. 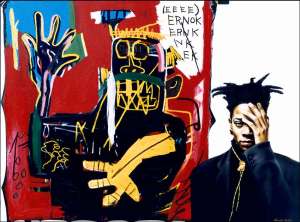 Basquiat, a film about the graffiti artist who is also known for his association with Andy Warhol was another peak into the crazy, unstable life of the inspired. Ambitious and confident to the point of being cocky, Basquiat made his way to a rather lonely top at a very young age. Having recently seen a German documentary on graffiti art, I was expecting to see more of that genre of art. But the film focused more on Basquiat’s rise to  (and eventual fall from) fame. 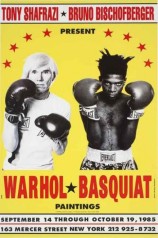 The son of a middle class family, Basquiat, inspired by famous artists like Van Gogh who produced their best works at the height of their misery, chose to live on the streets and converted public spaces into his canvases. A chance meeting with Warhol and his agent provided Basquiat his first break. Audacious and cocky, he grabbed the first chance he got to have his paintings shown at a gallery. His work was largely appreciated and he became an instant hit in the art circles, but he became a difficult artist just as fast. He changed dealers frequently and his attitude soon gained him a nasty reputation amongst his friends. Basquiat’s long association with Warhol gained him a lot of fame, but that association too came to a bitter end and when Warhol died, Basquiat was no longer in touch with him. Devastated by the death of Warhol, Basquiat went on a downward spiral, turning even more heavily to drugs and eventually died of an overdose at the rather young age of 28.

Like with Pollock’s oeuvre,  Basquiat’s art isn’t really my favoured genre d’art. However the film, like most films I’ve seen at NGMA this was an education. What really hit me in both films was the attitude of both artists and how alcohol and drugs seemed to be the source of their eventual ruin.

One thought on “Rendez-vous with Pollock and Basquiat”