Ever since I first read about Comic Con on Twitter, I’ve wanted to attend one. Comic Con came to India in 2011 and was organized in Delhi in 2011 by Twenty Onwards Media. Comic Con Express is the travelling version of Comic Con India. Its first stop was in Bombay in November last year and reading about it on Twitter and Facebook just made me go wild with envy. So when, Akshata Shanbhag, a friend who’s also an illustrator told me that Comic Con Express is coming to Bangalore, I knew I wouldn’t miss it !

I got there with my friend late in the afternoon and was immediately sucked into the crazy ambiance of comics despite the insane crowd and intense heat of the venue. 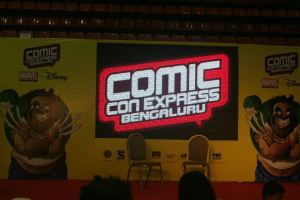 I was of course expecting to see Amar Chitra Katha there, but truth be told I didn’t know what else to expect apart from lots of comics books and people disguised as comic characters (which I later came to know was part of a costume play competition).

From vintage comics and popular favorites to new releases, Comic Con Express, Bengaluru, had it all. If there was a stall with rare editions and vintage comic books, there were also stalls of the classics (Marvel Comics, Astérix) and new comic books that were released at the event. Both of us went into a small frenzy, trying to absorb as much as we could and capture everything in our cameras.

In addition to the myriad comic book stalls, there were also stalls showcasing Universities where one could pursue a course to become a comic book artist / animation specialist and new software used by comic artists. And of course there were those incredibly tempting stalls with cool stuff – tee-shirts, posters, mugs, bags, magnets, coasters, stationary…yes I was very tempted indeed.

It helped however that most of the tempting goods were also available online (Chumbak, Bushirt etc) so I could concentrate on the real stuff – the comics and graphic novels.

My friend and I, floored by the creativity buzzing around us, walked around checking out all the stalls twice, before we narrowed down on the goodies that we thought were not to be missed.

If there was one drawback in the entire experience, it was the insanity of trying to find a stall we’d seen in our first round. The venue was way too cramped for the number of stalls and people, which led to much confusion all around. It would have been nice if the event had been a little more organized and there were maps handed to every person walking in.

It was nevertheless, an eye-opening experience for me, and definitely one to repeat next year – with more money to spend hopefully. 🙂