As a teacher,  I’ve been struggling for years to find a way for students to stay in touch with the language once they are done with their courses. Sure, they can (should) read, listen to the French radio channels, watch films, yada yada…the ways to stay in touch with the language are many and unlike when I was a student, all these solutions are just a click away. But for a student who has just finished the basic or intermediate levels, all of this just translates to : difficult, challenging, daunting, demotivating.

I’ve tried various things to provide them with resources to revise French after class, sharing them on various platforms (in-house social networks, WhatsApp groups, padlets…), but none of them seem to do the trick. The idea of a chatbot to help students stay in touch with what they’ve learnt in class came to me last year. Half-way through a survival French class for students who were about to leave for France for higher studies and in the midst of a new bot review (I think it was the Christian Grey bot), it suddenly struck me that a Messenger chatbot might just be THE solution.

Some basic research later, I had my first flow chalked out and got into discussions with freelance developers. But it wasn’t as easy as it looked. A year and many versions later, I finally had the courage to unveil Beta version of FranceSay during the Football World Cup. A version made entirely by me on Chatfuel. No developers, no designers, no Ux experts. Just me, a French teacher and chatbot enthusiast.

I’d been toying with the idea of a soft launch of the bot for a few weeks when France sailed through the semi-final of the Football World Cup…and the teacher in me saw a fabulous opportunity to motivate students to learn new phrases. I will be honest, I didn’t really care about the game. But I knew that I’d have students clamouring to learn some sentences that they could use during the match and basically look cool. So I rolled up my sleeves, did some (ok, maybe a little more than some) research and rolled out the Beta Version of FranceSay, the Chatbot.

Students of french could ping the bot and learn 10 expressions related to football.

Let’s talk tech, shall we?

I worked with two developers before finally deciding to run the show on my own. Limited budgets meant that I couldn’t go through revisions and the first two versions of the bot had very obvious issues. I couldn’t even see my most loyal students using it, leave alone a world of students who didn’t know me! That’s when I discovered Chatfuel. 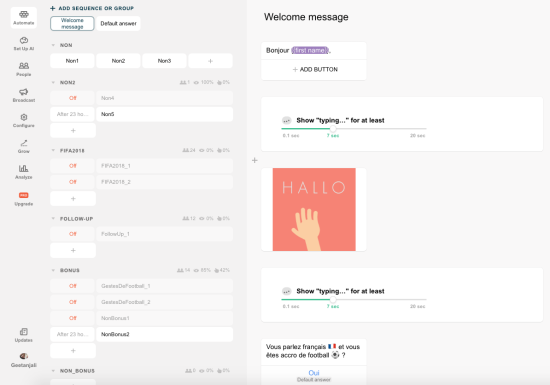 While the entire flow has been designed on Chatfuel, the images have been created on Canva, using icons from The Noun Project and  PNGTree.

The biggest challenge was getting the flow right. I kept thinking like a teacher accustomed to standing in front of students and wasn’t able to predict user behaviour. Add to that, the initial struggle of deciphering the jargon inherent to any platform, in this case sequences and blocks, and figuring out the best image configurations.

It took me a while to understand that the bot shouldn’t talk too much. Users weren’t there to read a dump of text from a bot and they were definitely not going to queue up to “talk” to it (him? her?).

Once I had the introduction scaled down, my next hurdle came in the form of ideal interactions. How many questions is too many ? Sure, GIFs are cool, but a chatbot that throws up a GIF every 2 minutes just looks retarded. Who would trust a blubbering GIF enthusiast as a teaching assistant? So out went all those cool GIFs. 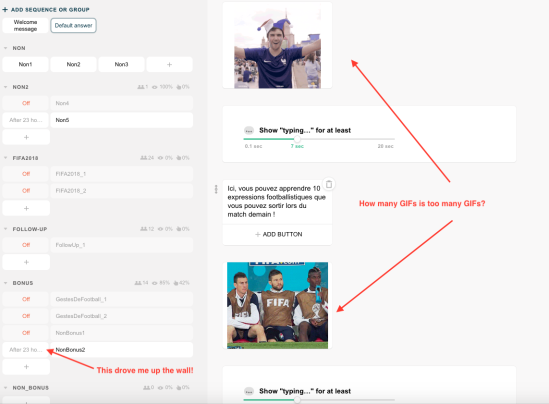 And then there were the tech hurdles. For starters,  I just couldn’t wrap my head around the functioning of sequences. I kept getting flummoxed when a response meant to go out 24 hours after a user responded with a « Oui », went out even if the user had chosen « Non ». 😕😬🤔 I think I’ve finally figured that out, though, after this first Beta.

Finally, I spent the better half of an evening figuring how to send out a follow-up broadcast message with some bonus vocabulary. I almost gave up, but the cards were just too beautiful to be abandoned and so I persevered till I cracked the d*&^ thing. (I may have ended up spamming some of the users, because of a screw-up in the sequence, so I guess it’s a good thing that I only had around 50 users!)

Now that I’ve observed, tweaked and figured out 🤞what works best, I’m hoping to launch the full bot by the end of the month, with added features and supports (and fewer glitches 🤞🤞🤞). Students will be able to revise useful sentences based on different situations and also do some basic exercises to test their understanding.

FranceSay, the bot will be available to users again from August 1st 2018.

One thought on “Making A Chatbot For Students Of French”