Some time last year I spoke about my growing fascination for cider, an interest that has grown since then, especially since my only contact with this beverage has been when I leave the Indian shores, making that first drink of cider a long awaited, and thus cherished one! This post continues that series on my love for cider… While I’ve enjoyed trying different ciders available in Toronto, my most memorable experiences have, without any doubt, been at Her father’s Cider Bar & Kitchen (which I’ve talked about earlier), Wvrst and more recently Brickworks Ciderhouse.

The ever increasing popularity of craft ciders is very evident at Wvrst, a modern take on a traditional European beer hall. Wvrst serves a wide range of beer, cider and wine, along with a very unique selection of sausages and the best fries I’ve ever had. Their website boasts of serving “600+ bottled and canned Beers and Ciders, and 24 taps of ALWAYS changing/rotating Beers and Ciders, with SIX taps devoted to Ontario Craft Ciders and two taps to Bourbon and a Digestive.” 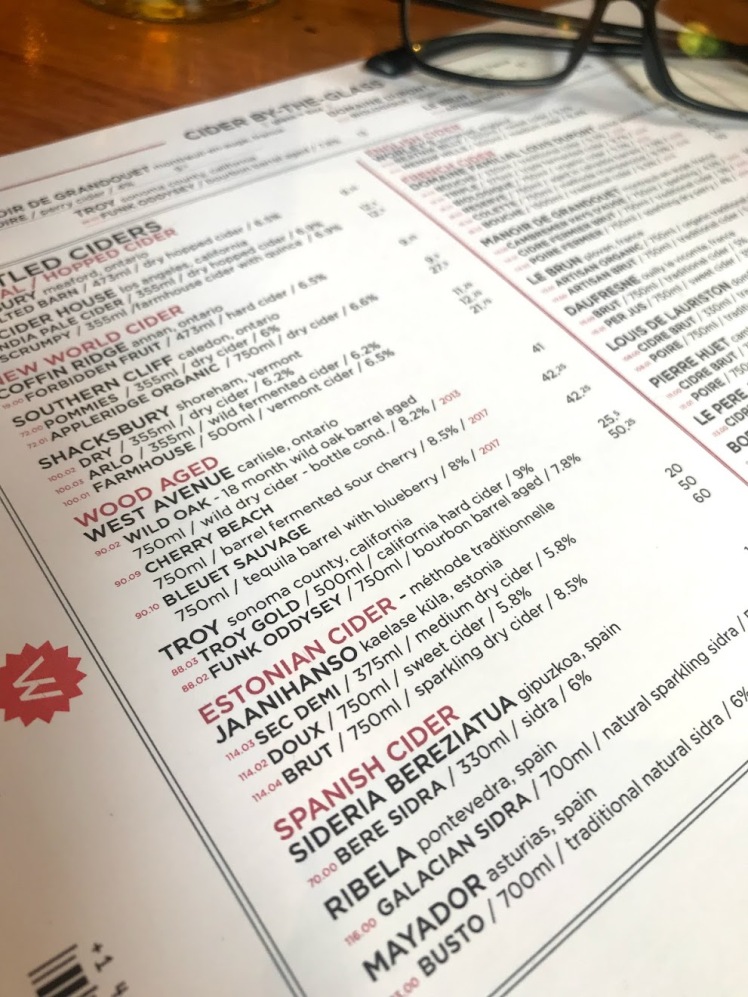 I’ve tried several several ciders at Wvrst, but my favourite experience and memory remains the evening at their King Street outlet, when we both decided to experiment and had flights of beer and cider. After washing down a fabulous meal of sausages and the delectable duck fat fries with some amazing and some not so amazing ciders, I got myself a glass of the Funky Odyssey cider by Troy, a cider which is aged for 9 months in bourbon barrels. 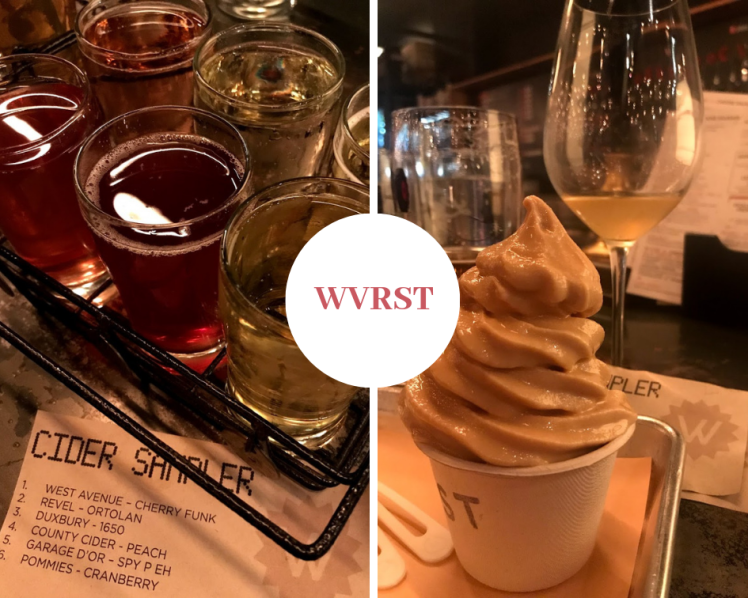 With a branch at Union Station, Wvrst is pretty much the first place I head to when I enter Toronto. I haven’t made it for their breakfast or their stall at Union Summer where they serve raclette as well – so that’s still on my bucket list.

Go to Wvrst for an absolutely unique experience. From the ambiance to the food and drinks menu, it’s a winner all along!

I wanted to go to Brickworks Ciderhouse from the first time I had one of their ciders at the Black Bull Tavern on Queen Street West, another of my favourites in Toronto for its completely laid back, warm and welcoming ambiance. I’ve had several of the Brickworks ciders over my three trips to Toronto, but finally made it to the Ciderhouse in Queen Street East in my last few days in Toronto this time. The first thing that struck me as I entered was the open layout of the restopub. They make their ciders on the premises, which had me even more excited about the whole experience.

I had a flight here as well, delighted to be able to try some of their newer (and more experimental?) flavours, like the Tepache made with wild fermented pineapple base, cinnamon, cardamom, allspice, and lactose sugar.

But  the one that had me truly excited was the New England Style Cider, “made with maple syrup and aged in Bourbon Barrels for 9 months resulting in dominant notes of bourbon and charred oak flavour balanced with apple and sweet maple.” A very smooth and mature cider, and definitely one that goes with the gastronomic experience offered by their chef!

With a menu that changes with the season, along with the cider, Brickworks Ciderhouse offers an extremely memorable culinary and cider experience and should definitely be on your Toronto cider tour!