A few months ago, I shared my journey from teaching to building startups. That was the beginning of a long journey in entrepreneurship, in which I am learning much about the world, and myself.

When we first started working on our start up, our focus was on the gig economy, a booming market trend in 2019. We had our MVP ready, and had acquired our first 2000 users, when COVID-19 struck the world. Among its many victims were gig workers. We saw a need for digital upskilling, for helping people discover futuristic career paths…and thus was born Adaptiv.Me. From its very inception, we knew that we wanted to build it as an international startup, preferably in Europe.

My co-founder and I have a long association with France, but we forced ourselves to explore other startup ecosystems in Europe – Germany, Netherlands, Sweden, and even Estonia. After quite a bit of research, many mails and a few calls with incubators and accelerators in the other countries, we found ourselves circling back to France. After much research, we applied to Station F in Paris, and Tarmac Inovallée in Grenoble. Of course, I had to apply to an incubator in Grenoble, and not just because I’ve studied there, but also because of its strong position in the French startup ecosystem.

We got through round 1 of the Station F selection process – a big validation, given the number of startups that apply to the biggest incubator in the world, backed by Facebook, Amazon, Microsoft and Google. 💪 But our sights were focused on Grenoble, home to a vibrant community of students, entrepreneurs and innovators…

Tarmac Inovallée sent us their acceptance letter in October. 🙌  💃🏻 🙌

….and then began the long wait for the official letter from the Direction Générale des Entreprises (a service of the Finance ministry of France), acknowledging our idea as an innovative project and giving us the authorisation to set up our shop in France.

After a nail-biting, frustrating and stressful 2 months, we finally got the letter in our hands in December! Adaptiv.Me was officially a member of the French Tech programme! (Read the official announcement here.) 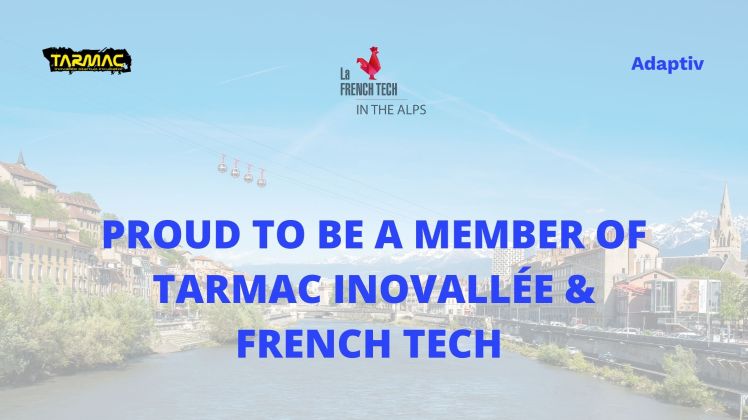 Time to pop that bottle of champagne? 🍾 Not yet, we said! Let’s get our visas first…

And so we started writing to the Consulate and Business France, India to find out if we could apply for a visa in these strange times, where you had to have compelling reasons to travel to France. Was our reason compelling enough? Would they accept our visa application? 🤔

While we kept writing, and knocking on the many consular doors for a response, we got our documents in order, kept our heads down and kept working on Adaptiv. Our MVP was shaping up beautifully, and by February we were working with a motivated group of interns, whose feedback helped us fine-tune our product vision and strategy.

The next few weeks passed in a blur…we got our visa in late February and before we knew it, we were taking the RT-PCR test 72 hours before we were due to fly. If we thought that the wait for the DGE letter was nail-biting, this was a hundred times worse. 😰 Sure, we had been very careful in the weeks leading to our travel, but what if….? And even if the result was negative, Indian airport authorities are notorious for giving travelers a tough time.

To our surprise the check-in and immigration was smooth, and we boarded the Air France flight, armed with a dozen surgical masks each (you have to change them every 4 hours, and we had a 24 hour journey ahead of us). A delightfully empty flight (sorry, Air France) later, we landed in Paris – and braced ourselves for an interrogation at immigration….only to be waved into the country, after a very quick check of our RT-PCR test. They didn’t look at any of the documents and attestations we had painstakingly printed, filled and signed! Paris-Lyon-Grenoble – the final leg of our journey was uneventful (though terribly cold)…and before we knew it, the train was pulling into the Gare de Grenoble.

…and we finally celebrated, in the confines of our AirBnb apartment with a bottle of French wine! 😊

The next few weeks promise to be full of learning curves – setting up a company in France, a country known for its red tape and bureaucracy, applying for the Carte de Séjour (resident permit), looking for an apartment, starting to build connections in the French startup ecosystem…this journey promises to be quite interesting indeed!