A few weeks ago, we asked some friends to come over on a Friday evening for beer and kebabs – what was to be a short affair, became a full fledged dinner party and we found ourselves wondering what to feed our guests.

Swiggy zindabad, I yelled!
Try Dunzo, said one of our guests.
What’s that you said? A new delivery app? Let’s try it, quipped the husband.

Refusing to budge and deny my favourite delivery app another opportunity to serve us, I insisted on placing an order on Swiggy, while my husband placed the rest of the order on Dunzo. We placed bets on who would come first – Swiggy won (of course) but by a few minutes. We had barely accepted the food from the Swiggy delivery guy that the Dunzo fellow rang the bell!

What followed was weeks of what I can only describe as lazy indulgence. Already in the habit of swiggying my way out of many weekday dinners, I found myself turning to the husband (I have of course refused to install what I perceive as competition to Swiggy on my phone) to Dunzo our way out of all kinds of silly things. Why pick up chicken en route after class, when for a mere 30 rupees, it can get delivered to your doorstep?

It wasn’t just chicken…before long, we found ourselves asking for tonic water, filtered coffee, peanuts, chips and even a loaf of bread (which is available a few metres from our home) because it was so bloody convenient. 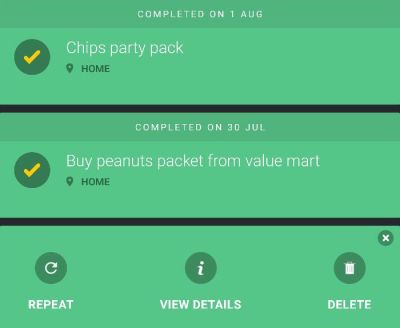 I woke up one day to the horrible realisation that I have let the delivery apps control my life to such an extent, that I’m no longer running an organised, planned household. It was okay to run out of stuff, because Dunzo would come to our rescue. Youpie!

We were also not going out anymore – I mean who wants to deal with that nasty traffic when food from your favourite restaurants can get delivered to your doorstep in less than the time it gets to reach the restaurant? How terribly convenient!

Convenient yes, but at what cost?

Convenience really is the new synonym for lazy decadence. How else could I justify that I was no longer taking the effort to walk down to the neighbourhood market/grocery store/supermarket to pick up fresh fruits, vegetables and other necessities, but simply commanding the anonymous Dunzo delivery boy to do my bidding? And how awfully feudal and pompous of me, to say that my time is too valuable to waste in running errands! Or that peanuts and chips to accompany that glass of beer are crucial to the success of my evening!

And let’s not forget what we are doing to the environment. In a city that’s losing its identity in the quagmire of nasty traffic jams, every time I send a Dunzo dude running to a store to pick up something completely random, I am adding one more vehicle to the insanity. One more vehicle that is weaving its way through the already choked streets, breaking traffic regulations to deliver in time – lest I turn to social media to vent my impotent anger at a delay in delivery and attack the brand. One more vehicle that leads to that much more pollution in the air, f***ing with our respiratory systems and blackening our souls.

Perhaps. But it’s true isn’t it? The price of convenience is the destruction of this beautiful city, once toasted as a city of gardens with the most clement weather in the country.

So have have we deleted the apps from our phones? No, despite everything we haven’t. But I am back to being an organised creature, planning my meals and making weekly visits to the market to buy stuff I need for the house and delegating some chores even to the husband. And oh, guess what? Tomorrow is date night after what seems like aeons! Dunzo and Swiggy could do with earning a wee bit lesser…if they are making any money at all to begin with, but that’s another story!