A restaurant I had passed often on my way to my corporate class or after shopping at 1 MG, Ente Keralam has been on my “to eat at” list for a while now. So when my friend showed me the advertisement for the Onam Sadhya special at Ente Keralam I knew I had to go. 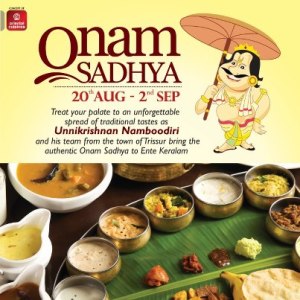 We got there sharp at 1pm expecting to get ushered in immediately, only to discover that we were obviously not the only ones who saw the advertisement and wanted to pamper ourselves and indulge in a lavish Kerala style banquet. We were told that we would have to wait at least 45 minutes and we almost turned away, before we realized that the same fate would await us at any other restaurant at that hour. And so we waited…and admired. The lobby of the restaurant is large, airy and reminiscent of a Kerala home with its high ceiling, wooden benches on one side, a large welcoming flower rangoli and a huge brass lamp in the middle. If I’d seen a photograph of just the lobby, I would have never guessed that it was a restaurant. The waiting area outside was equally charming with the rustic seating, lush green plants and decoration of plantain leaves. 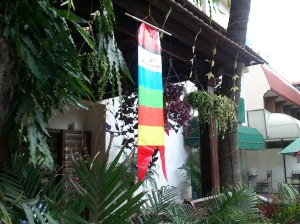 By the time our names were called out, we were famished – and a good thing it was, for I don’t know if we would have been able to do justice to the meal 45 minutes earlier!

Onam Sadhya, as you can see is an elaborate vegetarian thali meal, served on a banana leaf on the occasion of Onam, the harvest festival of Kerala.  Traditionally the meal has 24 to 28 preparations, including boiled rice, sambar, rasam, aviyal, various vegetable preparations in coconut milk / oil and pickles. We ate in almost complete silence as we moved systematically from the papad and pickles to the various bowls, sampling the wide variety of vegetarian dishes in complete awe.

The best part (as usual) was the dessert. Each of us got 4 types of “prathamam,” a sweet dish, made with sugar or jaggery with milk or coconut milk. It is very similar to payasam. Needless to say, I was in culinary heaven. Anand. Pure bliss.

My friend and I had a tough time getting up and head home after the meal. All we wanted to do was collapse on the closest available bed like satiated whales! Bien évidemment, we left with a resolution to return and sample their non-vegetarian fare.

My rating : 4,5 out 5 (waiting to sample the non-vegetarian preparations before I give it a full 5 !)